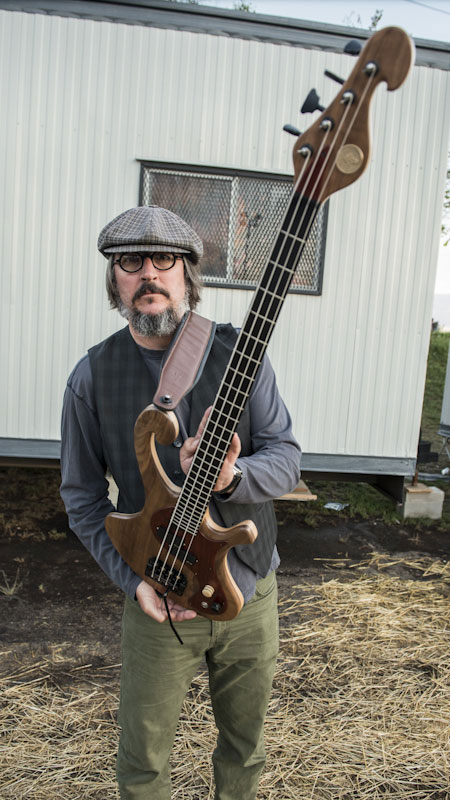 When I was a young lad a friend of mine had a cheap bass guitar that he was selling for $30. I had $15 so I pleaded with my father to loan me the rest so I could buy it. “So, this is something you’re really interested in huh?” he said, “Well if you’re going to do this then let’s do this right” and, much to the chagrin of the rest of my family, off we went to Al’s music to talk to my dad’s buddy Al about getting the instrument of my fancy. $150 later I had my black Memphis P-Bass copy in my hands and the blisters were on their way. I cherished that bass though my dream was to one day have a Rickenbacher 4001 just like Geddy Lee and Chris Squire played but alas, I had no money. In fact it took me an entire summer of pulling weeds and digging postholes to pay off the Memphis. I played that Memphis for a couple years until I had saved enough money to buy my Rickenbacher. When I went to Leo’s music in Oakland to order my dream, being the doe eyed impressionable youth that I was, I was easily talked out of buying the Rickenbacher and steered towards the new Ibanez Musician EQ by a salesman with long brown hair and a giant moustache. Though the instrument was nice and very easy to play, in hindsight I should have got the Ricky…oh well. But destiny has it’s way of grabbing you my the nose and pointing you in the right direction because less than a year later I was at that same store buying a tuning fork or some other piece of musical swag when I stumbled across what would become the four stringed love of my life; a Carl Thompson piccolo bass.

It was as if I’d found the Holy Grail. There is was, on a stand in all it’s glory. I picked it up and held the meticulously hand carved walnut body in my hands. It was like some dense piece of driftwood that had been shaped by the gods. I ran my fingers up and down the ebony fret board and maple neck and nearly started salivating. The gold tuning pegs and brass bridge were magnificent and gave the instrument an aura of distinction that I had only seen in films about swords that are presented to kings from women emerging from English lakes. I put the bass to my knee and played. It felt like butter in my hands and my fingers were able to do all those things with ease that I had once found difficult. I looked at the price tag; $600. Once again I scrimped and begged and borrowed to get what would become my comrade for the next two decades plus.

I’ve had many basses over the years since then and have found that there are certain elements of different instruments that appeal to me on various levels but the one thing I never really came across was an instrument that could fulfill all my needs. The Carl Thompson had become such a huge part of my sound and persona yet I yearned for a bit more versatility. Having owned several instruments built by Carl and knowing that his basses are all very unique as well as incredibly well crafted, each with it’s own personality and expression, I decided to design a signature instrument of my own.

My first thought was to approach Carl about it but it would be much like trying to instruct Piccaso on what he should paint and how to do so. I then ran through a short list of luthiers that I know and respect and my old high school buddy Dan Maloney jumped out at me. Actually he was the older brother of twin high school buddies Joe and Mike Maloney and he was known as the guy who built a cool walnut guitar in high school wood shop as well as the guy who was old enough to buy us beer when we were underage. Dan had built a few basses for me over the years including a four string fretless, an electric upright and my infamous banjo bass. Dan had cut his teeth developing electric violins and cellos for Zeta systems for several years and, besides being a great easy-going fellow, he knows and excels at his craft.

My idea was to incorporate the traits of the instruments I have loved over the years and throw in a few innovations of my own. I wanted the basses to be incredibly easy to play and feel comfortable in the lap as well as on the strap. Having sketched my dream basses out on napkins, tablecloths and notebooks in doodling frenzies over the years, I focused my design and drew up a template that I presented to Dan. He then built me a pine mock-up that I fondled and futz’d with and eventually took my old carpenters rasp to until I carved it into an optimum shape. After some more refinements and some suggestions from Dan here and there, we built a rough prototype that I debuted on New Years Eve 2010. After a few more refinements and more rasping on my part, what we finally ended up with what is now known as the PACHYDERM bass guitar.

The term ergonomics gets thrown around a lot these days but these instruments are form fitting and balanced to the point that a person can play one for hours on end with little to no fatigue. The tonality of the PACHYDERM, (though each varies subjective to wood choice and whatnot), is full bodied yet with a focus on distinction. These basses are punchy in all senses of the word. I’ve had semantic discussions on the notion of punchy over the years and some have a very different perception of the word. My perception of punchy is that the tone is a tad pointed in it’s attack yet round in it’s finish; much like throwing a baseball against the wall of an old barn. Percussive yet rich in tone is the goal and with the various combinations of wood, body shaping as well as electronics, these basses reach and surpass that goal. As far as styling, I wanted an instrument that would highlight the beauty of the chosen hardwoods as well as a shape that had a certain flair and panache. Having grown up in a family of auto mechanics, hence being an avid car guy, as well as having a Sam I Am tattoo on my right shoulder, this bass somewhat reflects the design of an early sixties Chrysler as well as a Jaguar E type with a bit of Dr. Suess thrown in to boot.

I built these basses to suit me and much to Dan’s potential frustration, I tend to keep the ones he builds but at this point I think it is time to start trickling some of these out to the world. When I first picked up my Carl Thompson it elevated my abilities and helped take my playing places that I just could not have reached with conventional instruments of the day and for that I am eternally grateful. I hope that some like minded individuals will find that kind of inspiration and elevation in the PACHYDERM basses because when all is said and done, a relationship built with a good instrument can not only last a lifetime but can span generations as well as potentially evolve the landscape of music.